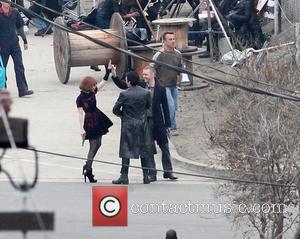 Picture: Justin Timberlake and Amanda Seyfried giving each other a high-five while filming on location for the new movie 'Now'. Los Angeles, California - 15.12.10

Justin Timberlake is adamant fans of his music are upset with him turning his attentions to acting - insisting his followers view him as "ungrateful" for his pop achievements.
The SexyBack hitmaker was lauded for his portrayal of internet entrepreneur Sean Parker in The Social Network earlier this year (10) and he's currently preparing to promote four other projects over the next 12 months.
And despite insisting he will return to music in the future, Timberlake has addressed his fans who see him as a traitor for focusing on films - and asks them what they would do if they got the chance to make it big in the movies.
He tells the Associated Press, "They're looking at me like, 'Why aren't you staying with one path?'. They look at me like I'm ungrateful for my music career because I want to do film.
"I had the same obstacles in music. I still do. But I feel like I should pose the question to everyone else - If you had this opportunity, what would you do with it?"