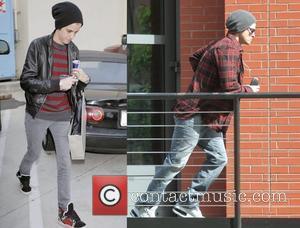 Picture: By attempting to avoid the paparazzi, Justin Timberlake made the mistake of dressing just like Samantha Ronson! Samantha Ronson carrying a large shopping...

Justin Timberlake and Jamie Foxx were among the artists who paid tribute to record label boss BARRY WEISS at a star-studded event in New York on Thursday night (18Jun09).
Timberlake provided a comedic turn as he hosted the charity bash in honour of the RCA/Jive Label Group President, who has guided the careers of acts including Britney Spears, 'N Sync and the Backstreet Boys.
The pop singer took to the stage to act as master of ceremonies as Weiss was honoured with the UJA-Federation's Visionary Of The Year award, and recalled an amusing meeting with his boss.
He told the crowd, "If I remember correctly - and trust me I do - Barry said, 'That song is not what people want from you, Justin... That song is not going to sell'", as the room was filled with the sound of Timberlake's chart-topping track SexyBack.
The star added, "I think he was just jealous, he wanted to be the one bringing sexy back."
Foxx followed Timberlake on to the stage to provide the musical entertainment, belting out Georgia On My Mind, the classic hit from Ray Charles, whom Foxx won an Oscar portraying.
Others in attendance included Diane Sawyer and Chris Daughtry.