VMAs Reminded Us Of Why We Hated Each Other - No NSYNC Reunion Then?

Turns out, it's all about Justin.

Any Nsync fans out there latently hoping for a full-fledged reunion to add to the band’s mini one at the MTV VMAs better get ready for some disappointing news: they’re not getting back together, and if anything, their brief flirtation with a comeback simply reminded them what split them up in the first place.

"It was funny because all of us getting back together, we remembered what we love about each other and what we hate about each other," band member Chris Kirkpatrick said Monday in a Florida radio interview with Johnny's House. "It was just a bit of fun. (U.S Magazine)

According to Kirkpatrick, the whole thing was designed to help Justin out; they were part of his set, and the goal was not to mess it up for him. "Honestly, when he talked to us I thought we were just coming out with mic stands and singing," he admitted. "When I came home from rehearsals my girl's like 'Why are you drenched?' . . .I'm too old for this! I was so worried about not messing up for him."

Rumours leading up to the VMAs were of NSYNC’s reunion, and when fans saw their popstar idols take the stage together for the first time in years, reunion talk was as strong as ever, but that doesn’t look like it’s going to happen now. They weren’t even the biggest story from Sunday night, as Miley Cirus’s raunchy performance turned all the heads. 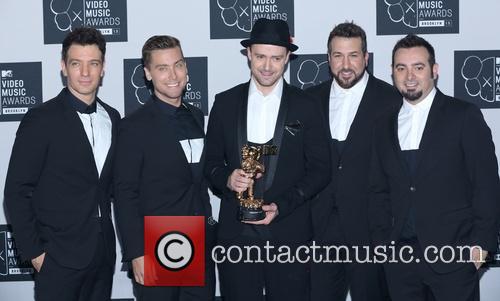 Justin Timberlake and his NSYNC boys were back... briefly.