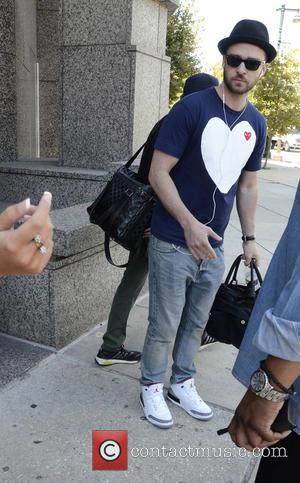 He also wowed with a show-stopping performance featuring a medley of his solo hits and a brief 'N Sync reunion.

Lady Gaga kicked off the ceremony at the Barclays Center in typical bizarre fashion, dressed as a futuristic Mother Superior. The Paparazzi singer began her performance of new single Applause wearing a weird white nun's habit but the get-up was quickly ripped off her by dancers to reveal a glittery black leotard with matching skull cap.

That outfit became a shimmering blue two-piece, topped by a peroxide white wig. The pop superstar also donned a canary yellow wig and face paint during the opening performance, and wrapped it up following a quick change, dashing out in a two-piece bikini and long blonde shaggy hairpiece.

The former child star then proved she's all grown up by ripping off her top to reveal orange rubber bra and panties as she took part in a performance of Robin Thicke's Blurred Lines. The hitmaker strutted out on stage wearing the thick-striped black and white suit.

During the pair's suggestive routine, Cyrus donned a large foam hand to feel Thicke up with and then bent over and wiggled her backside into the singer's crotch while smiling with her tongue hanging out.

After watching Cyrus dancing with Thicke, comedian Kevin Hart joked, "Miley better go and get a damn pregnancy test after doing all that grinding."

Video of the Year - Mirrors by Justin Timberlake

Best Male Video - Locked Out of Heaven by Bruno Mars

Best Female Video - I Knew You Were Trouble by Taylor Swift

Best Pop Video - Come & Get It by Selena Gomez

Best Song of the Summer - Best Song Ever by One Direction