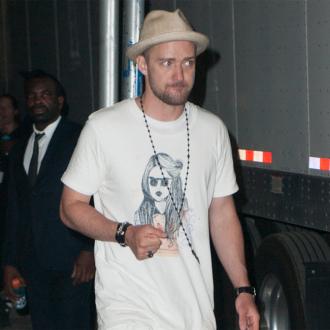 The 'Mirrors' hitmaker and former bandmate Chris Kirkpatrick visited bowling lounge Kings in Boston's Back Bay on Thursday (17.07.14) where they bowled a few rounds before enjoying some food.

A source told PEOPLE: ''Justin bowled a 173, 142, 94 and 14. He ate a blackened chicken sandwich, buffalo wontons and drank a Stella Artois beer [before tucking into a] peanut butter sundae for dessert.''

The duo were joined by Chris' wife Karly Skadany, some friends and two bodyguards but Justin's wife Jessica Biel is not believed to have been there.

Jovial Justin even signed a bowling pin before he left.

The 33-year-old singer was in town for his show at Boston's TD Garden and a few nights later enjoyed a slap-up meal at Strega Waterfront Italian restaurant.

He feasted on a number of items including homemade meatballs, scallops al Grand Marnier, lamb chops and homemade cannoli.

His waiter told PEOPLE: ''Justin was easy going and super friendly. A regular guy who likes to have dinner with his friends.''

NSync went on hiatus in 2002 and reunited briefly last year to perform with Justin at the MTV Video Music Awards (VMAs).