Justin Timberlake praised wife Jessica Biel for being ''the sweetest, most gorgeous, goofiest most bad-a** chick'' he knows on her 33rd birthday. 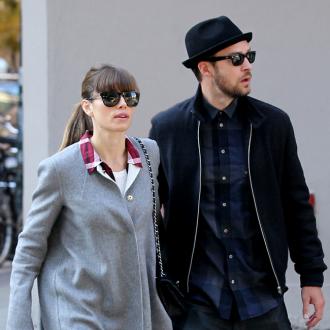 Justin Timberlake says Jessica Biel is ''the sweetest, most gorgeous, goofiest most bad-a** chick'' he knows.

The 'Love Never Felt So Good' hitmaker posted a heartwarming message to his pregnant wife, who is set to give birth to their first child in ''late March or early April'' on Instagram to celebrate her 33rd birthday on Tuesday (03.03.15).

The 34-year-old heartthrob shared a photograph of himself looking down at the smiling 'Total Recall' actress, with the caption: ''Happy Bday to the sweetest, most GORGEOUS, goofiest, most BAD-A** chick I know. You make me smile 'til it hurts. I love you like crazy! -- Your Huz (sic)''

The singer visited Jessica on the set of her upcoming film, 'The Devil and the Deep Blue Sea,' in New Orleans over the weekend.

The couple, who got married in Italy in 2012, were spotted having dinner with the brunette beauty's co-star Mary Steenburgen and husband Ted Danson after they wrapped up filming on Saturday (28.02.15).

The 'SexyBack' singer confirmed Jessica's pregnancy on his birthday in January following months of speculation.

A source previously claimed that they were ''worried'' about announcing the news.

The insider explained: ''They've been trying for a while to get pregnant, there've been some issues so that's probably part of it too, they don't want to announce it until it's further along and they're out of the woods for a miscarriage.''