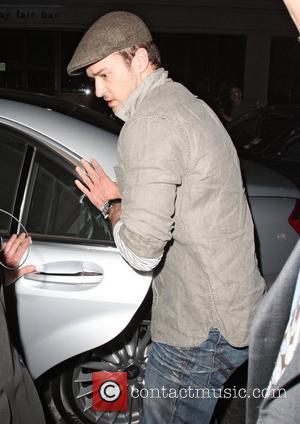 Justin Timberlake sent fans into a frenzy on Wednesday night (31Aug11) when he performed an impromptu show at his New York restaurant in front of celebrity fans Emma Roberts, Amanda Seyfried and Kim Kardashian.
The SexyBack hitmaker took to his Twitter.com blog that afternoon to announce plans to perform with his new hip-hop/rock group FreeSol at Southern Hospitality in the Hell's Kitchen area of Manhattan, giving devotees just a few hours' notice.
They turned out in force for the mini-gig and quickly packed out the barbecue eatery, prompting police to step in to help control the large crowds forming on the streets outside the venue after it had reached capacity.
The anticipation of Timberlake's first musical performance in months drew the attention of actresses Roberts and Seyfried, while Kardashian was also in attendance, joined by her new husband, basketball star Kris Humphries, her older sister Kourtney and her partner Scott Disick.
Fans screamed in excitement as the pop superstar emerged with FreeSol and he jammed with the band throughout their set, playing the keyboard as they performed a handful of new tracks, including their debut single Hoodies On, Hats Low.
But Timberlake stole the spotlight by taking centre stage to rap on one of FreeSol's tunes, before singing an acoustic version of his hit single What Goes Around... Comes Around as he played the guitar.
Timberlake then thanked the audience for showing their support at such short notice, saying, "So you got my tweet, huh?"
The last-minute set was a warm up for FreeSol ahead of their free concert at the Big Apple's Irving Plaza on Thursday night (01Sep11).
Timberlake signed the five-piece to his label Tennman Records in 2006.