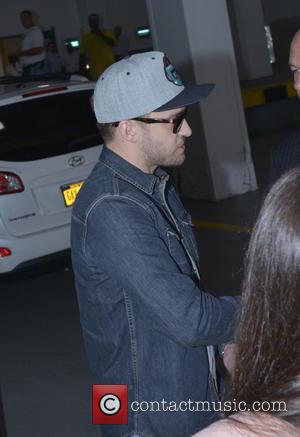 The two chart rivals appeared to have fallen out when rapper West took aim at Timberlake's Suit & Tie hit during a London concert in February (13), revealing he wasn't a fan of the tune the singer recorded with his pal and collaborator Jay Z.

Timberlake responded a month later while performing on U.S. comedy sketch show Saturday Night Live by changing the lyrics to the song and singing, "My hit's so sick got rappers acting dramatic."

But now it seems their brief spat is over - following a meeting behind the scenes at the Barclays Center in Brooklyn.

In a new interview, Timberlake insists he was not upset or annoyed by West's remarks, stating, "At the end of the day it's just music. I love the record, I love Suit & Tie. It reminds me of the music I grew up listening to. I respect his opinion because I think he's a genius, but I don't share that opinion."

And he told Mtv newsman Sway Calloway that he and West had exchanged pleasantries at the Vmas, adding, "I told him, 'I f**k with you, in a way that you probably don't even understand. I get what you do.' We've never worked together, so I don't think that he fully understands what it is that I can do, but I love Yeezus, I love that album. I think he's ahead of a lot, especially in his genre. I think people are going to appreciate it a lot more in the future."

And now Timberlake admits he's keen to work with the rapper.