Let it never be said that the KFC Yum! Center in Louisville, Kentucky, isn't fit for a romantic setting. During his recent concert at the arena on Sunday (15 Dec.) night, Justin Timberlake helped out a fan in need with one heck of a grand statement, by helping the fan propose to his girlfriend midway through the show. 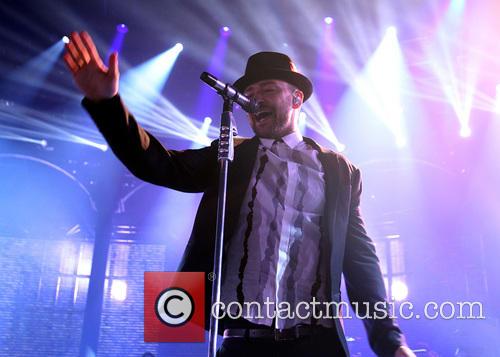 JT put on one heck of a show in Louisville

After making his way through his hit 'That Girl,' Timberlake brought the show to a stop and helped Joshua Clemons on stage, giving him a helping hand in asking for Kim Martin's hand in marriage.

"Josh called earlier, he's got something he wants to tell you," JT told Kim as he led the pair on stage. As JT told Kim that her boyfriend has something to ask her, Clemons got down on one knee and the crowd went wild! And of course, she said yes!

It was a big moment for the two lovers, one that Kim is still struggling to get over. She and Josh spoke with local Louisville station WDRB-TV about the proposal on Monday (16 Dec.) and spoke of her excitement and how she was completely blown away by the gesture. She said, "I was just like there is no way, no way this is happening right now and I got up there and it was and I was in total shock. I couldn't do anything, but just stand there and oh my goodness."

And then this happened in Louisville... http://t.co/Tb2zZ5IoBQ

"When I heard Justin was coming in June when it was announced I immediately started trying to get tickets. I'm a huge fan, I have been. I knew Kim was a big fan," Clemons told the station, but it wasn't easy turning his plan into reality, however once JT caught wind of the proposal he couldn't wait to help out. "Friday we finally caught each other on the phone and said Justin had a big plan and wanted to know if I was ready to do it big and I said definitely."

"He was just very involved in this. I was very surprised he took initiative to help him so much and the way he talked with us," Martin continued. Her future husband then gave this message to the people: "Anything is possible. You never know until you try."