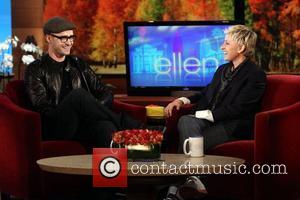 Picture: Justin Timberlake appears as a guest on NBC's 'The Ellen DeGeneres Show' to talk about his new movie 'Yogi Bear'. USA - 19.11.10

Justin Timberlake's former 'Nsync bandmate Lance Bass is backing his pal to win an Academy Award nomination for his "amazing" turn in THE SOCIAL NETWORK.
The SexyBack hitmaker has been busy trying to forge a career on the big screen, and received rave reviews for his role as Napster founder Sean Parker, who helped launch the social networking site Facebook.com.
Timberlake is now reportedly set to mount a campaign to convince Academy Awards bosses he is worthy of a Best Supporting Actor Oscar nomination at next year's ceremony (11) - and Bass is adamant he deserves it.
He tells PerezHilton.com, "Of course (he deserves an Oscar nomination)! Justin did an amazing job in the movie. He was incredible. I think the movie itself should be nominated for sure as well. I mean, why not?...
"When I saw the film, it just blew me away. And he blew me away. His portrayal of Sean was just amazing."