Review of The 20/20 Experience Album by Justin Timberlake

There's a fine line between sexy and sleazy and Justin Timberlake, with his posse of heavyweight producers (notably Timbaland and J-Roc), his reedy falsetto and his insistence on singing about making love in a spaceship, well. he's treading a fine line, there. Teetering on a tripwire of decency. On the one hand, you can't help but fall for the old school charm, that '50s smoking-jacket-and-cigarette allure that JT's trying so hard (yet, so effortlessly!) to cultivate. The 20/20 Experience starts with a flourish of vintage strings that are quietly peppered with a subtle, Daft Punk-esque synth line. That nostalgic aesthetic (displayed succinctly on the black & white video for 'Suit & Tie') is mixed up with fashion-forward beats and contemporary context, just to prove he knows the world's moved on since the days when all women could do was sit around and wait for that high-school heart-throb to call. 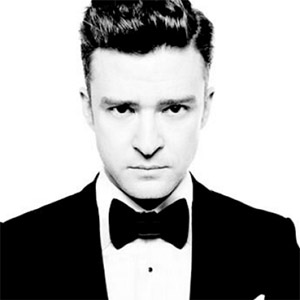 We're not fooled, of course. Justin Timberlake makes (and always has made) pop music with the sole purpose of making female humans faint. These are the kinds of songs that are designed to be sung to the girls in the front row, designed to slay them and watch them fall like dominoes as their hormones combine forces to weaken the knee joints and cause a physical collapse. For every reader that feels enraged by this state of affairs, of course, there will be several other human beings willing to offer themselves up at the altar of Timberlake and perpetuate this pithy desire for the All-American Boy that JT likes to portray. He doesn't care about your mind, ladies, he just likes the way you chew that strawberry bubblegum. So much so, in fact, that he's going to plough that retro imagery as deep as he can an even write a song about you chewing that strawberry bubblegum. And he's gonna go right on and name that song "Strawberry Bubblegum." And don't be surprised if you can buy JT-branded strawberry bubblegum at his shows some time soon.

You've got to hand it to Timberlake. If you took the time to dissect the lyrical content of his songs, you'd be in hysterics. It would come as no surprise to learn that Timberlake had not actually written these songs, or indeed employed someone else to write them, but had in fact used some kind of sleazy online lyric generator, jam-packed with R&B platitudes ("all I want is you," etc), sensory input (anything about how someone happens to taste, an appeal for them not to change their flavour - that kid of thing) and the odd leftfield scenario that's so ridiculous you cant help but buy into whatever he happens to be singing about (sex in a spaceship works well here). Somehow, though, that JT magic comes into play and you can't help but buy into the rose-tinted vision that Timberlake takes of the world, lent gravitas courtesy of his Midas-touch producers.

You want to sing about having sex in a spaceship? Go for it, JT. We're right behind ya, buddy. There's something about those crisper-than-fresh-bedsheets synths, Justin. Something about those icy beats. They just offer up some kind of unfathomable credibility (and sex appeal) to pretty much any nonsense that comes out of your mouth. Can we have the keys to the spaceship, please? "I look around and everything I see is beautiful," he sings on 'Tunnel Vision,' "because all I see is you." God, it must be great being Justin Timberlake. All that natural swagger and off-the hanger class? It's overpowering enough to cause us to forget that you have an unhealthy Michael Jackson obsession. The smooth Motown tribute of 'That Girl,' the tribal - orchestral mash-up of 'Let The Groove Get In' the Prince-esque funk of the utterly-ridiculous 'Spaceship Coupe'? We'll forgive the anti-climactic ending of 'Blue Ocean Floor' for these gems. We'll forgive the nonsense that you spout on pretty much every track on this album. There's a fine line between sex and sleaze and Timberlake shall forever be wavering, one-footed, teasing on that tripwire.