Love, Sex, Magic: Congratulations to Justin Timberlake and wife Jessica Biel, who married in Italy over the weekend. Though the ceremony was pretty hush-hush, we know Questlove kept up his recent string of wedding DJ duties: but did he play any N-Sync? 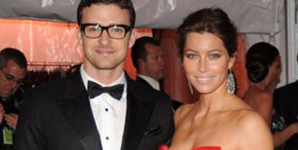 Bond Beauties: Daniel Craig was flanked by his stunning co-stars Berenice Marlohe and Naomie Harris at the London premiere of James Bond, Skyfall, on Tuesday. In what will surely go down as the glitziest premiere of the year, the stars were out in force. But who was the best dressed? Funny People: High fives to Ellen Degeneres, who is now, officially, funny. Let us explain, the comedienne has been awarded the Mark Twain Prize for American Humor, i.e, the nation’s highest accolade for comedy.

Money Ain't a Thang: It seems no amount of cash or high powered lawyers has helped Jay Z and Beyonce’s on-going battle to trademark their daughter’s name. The superstar couple were defeated by Boston wedding planner Veronica Alexandra who has been using the Blue Ivy name for her company since 2009.

The Trial Continues: Sam Lufti’s court battle against Britney Spears continued this week. Britney’s former manager is suing the star and her family for defamation of character alongside numerous other allegations. We’ve got all the latest news!

Swift Return: Red, the fourth album from country-pop starlet Taylor Swift is poised to hit the top of the Billboard 200 after selling a miraculous 262,000 downloads in just one day! It’s likely to break the million barrier before the week’s out. The Cockroaches, Live! Missed out on tickets to the Rolling Stones’ London shows? Fear not, you could still be in with a chance of watching the legendary rockers in a tiny venue over the next couple of weeks! Just keep an eye out for any ‘Cockroaches’ gigs! Confused? Read on.

Superman, unemployed? Clark Kent, aka Superman, is without a job after resigning for his role at The Daily Planet! In a forthcoming comic, Kent quits over the newspaper’s move to lighter entertainment stories. Perhaps he’ll become a blogger?

And Finally: Psy continued his quest for world dominance this week by stopping by the United Nations to meet with the U.N. Secretary General and fellow South Korean Ban Ki-moon. It begs the question; WHY IS PSY BEING INVITED TO THE UNITED NATIONS? But he did the dance, so, that’s fine.

Video of the Week: This week’s hottest footage comes from a New York fashion event where model Alessandra Ambrosio was showing off a $2.5 million Victoria’s Secret bra. Yep, we said $2.5 million. Check it out!