Justin Theroux tattoos his artist Scott Campbell while under the influence of alcohol. 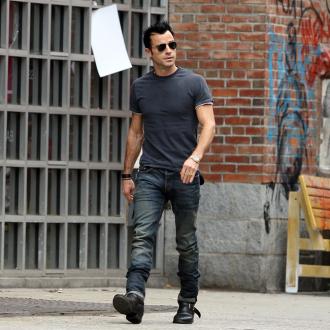 The 42-year-old actor, who has a number of inkings across his body, has etched a few designs on the famous artist in the past but he admits he was under the influence of alcohol, so the artwork didn't go according to plan.

Speaking to Vanity Fair magazine, he explained: ''We became friends first, and then we had a couple drunken tattoo nights. And I've tattooed him, too, by the way ...

The hunky star's tattoos are plastered across his back and legs, but he insists he doesn't regret any of them.

He explained: ''Not one [of them I regret]. I'm riddled with them; I'm ruined with tattoos.''

Justin prefers to let Scott, who is married to Lake Bell, come up with the designs because he's got better ideas.

He added: ''I get a couple of little ideas, but I know Scott's taste is so much better than mine ... so I usually throw out a few buckshot ideas, and then let him go back to the lab and scribble out a couple of drawings ... He did my entire back, and I've never looked back. I was just, like, 'Do whatever the hell you want. You lay it out how you want.' He's got such an incredible aesthetic.''