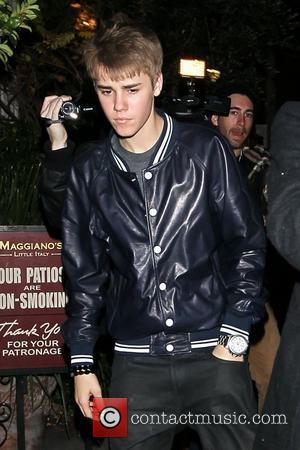 Justin Bieber and Selena Gomez stepped out in Los Angeles together for the second time in a week on Tuesday (01Mar10) to mark the Baby hitmaker's birthday.
The stars, who are rumoured to have been dating since last year (10), attended Vanity Fair's post-Academy Awards bash on Sunday (27Feb11), and put their arms around each other as they posed for snappers on the red carpet.
They were later pictured sitting side by side in the venue, with Gomez resting her hand on Bieber's left knee - and they spent the evening in each other's company again on Tuesday to celebrate the pop hunk's 17th birthday.
Gomez and Bieber were caught on camera heading to Maggiano's Little Italy restaurant in Los Angeles to mark Bieber's big day - although the Disney star attempted to avoid photographers by covering her face with her hands.