Police Appeal For Eyewitnesses In Justin Bieber Bust-up With Photographer 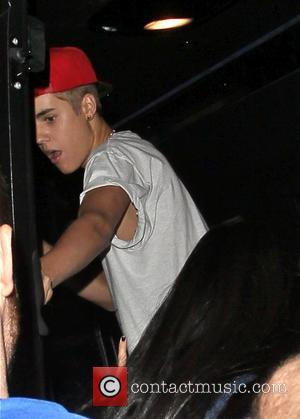 Los Angeles police investigating an alleged altercation between Justin Bieber and a paparazzo on Sunday (27May12) have appealed to witnesses to come forward with any information about the incident.
The teen superstar reportedly became embroiled in a fight with a snapper at a shopping mall in Calabasas as the man attempted to take pictures of the singer and his girlfriend Selena Gomez leaving a cinema.
The photographer was briefly hospitalised for treatment and filed a police report over the scrap, and cops have expressed an interest in speaking to Bieber about the bust-up.
Now officials at the Los Angeles County Sheriff's Department have reached out to the public in a bid to get to the truth of the matter.
Anyone with information about the incident has been asked to contact detectives at the County Sheriff's station or call Crime Stoppers anonymously.
Bieber, who is currently on a promotional tour in Europe, has yet to comment on the allegations.