Justin Bieber pulled out all the stops as his Believe tour rumbled into one of the most famous music venues in the world, the star playing in New York's Madison Square Garden. It's been a topsy-turvy few weeks for the teenager, with his split from Selena Gomez initially taking the headlines, before the pair apparently got back together, with various sightings of them in restaurants and showing displays of PDA. He certainly had a big smile on his face as he played to a sold-out MSG last night (November 28). 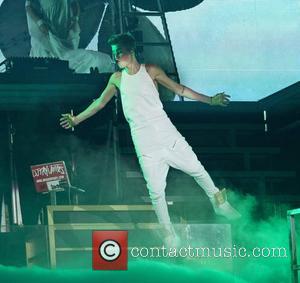 Bieber wasn't the only one flying, joined on stage by a host of 'angels'

Bieber powered through a set that spanned both his multi-million selling albums, as well as getting well into his sexy dance moves. It was just as well that the star was on top of his game, given the quality of the support acts. Carly Rae Jepsen, owner of one of the catchiest song released this year in 'Call Me Maybe', opened up the show, with fast-rising boy group The Wanted also putting on an impressive show before the main event. There was no doubt it was Bieber's night though, the star keeping the audience eating out the palm of his hand throughout, graceful and effortless in comparison to the scenes of a couple of months ago where he struggled through a bout of illness. Bieber is entering the last two weeks of a busy touring schedule... though more dated are scheduled for 2013.

There's plenty more for Bieber to get through before he can enjoy his Christmas turkey; the star is gigging right up until December 12 whrere he'll play in Atlanta. He's far from done even though, playing the rest of North American in January and February before crossing over for a mammoth tour of Europe. You can't say that he doesn't work hard for his cents.