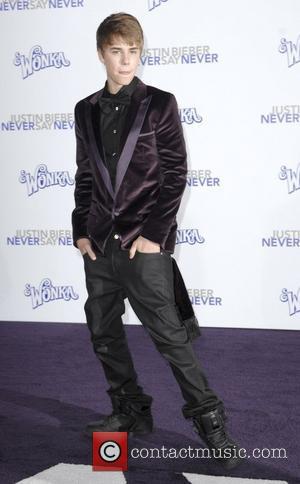 It's curious that in all of the reviews of Never Say Never , which chronicles the meteoric rise of 16-year-old Justin Bieber from his obscure Roots in Stratford, Ontario, Canada to his sold-out performance in Madison Square, there is not a single reference to an earlier teen idol's remarkably similar Journey. Ricky Nelson had in fact been a familiar face in American homes from childhood during his weekly appearances with his parents and brother on the long-running The Adventures of Ozzie and Harriet in the 1950s and '60s. By the mid-'60s he already had a slew of pop hits to his credit, including one called "Teenage Idol," in which he sang about the loneliness of celebrity life. ("Some people call me a teenage idol/Some people say they envy me/I guess they got no way of knowing/How lonesome I can be.") Then, at his first appearance at Madison Square Garden in 1971, he attempted to perform more "adult" music -- and was promptly booed off the stage. A year later, he turned the experience into a pop hit called "Garden Party." The Nelson/Bieber parallels are striking. Even -- perhaps especially -- their androgynous images. But so is the critical reaction to them. Critics have invariably scorned teen idols and dismissed their followers as mindless, squealing prepubescents. That is the case with most of the reviews of the Justin Bieber concert documentary Never Say Never. "A G-rated infomercial for the Bieber brand" is the way Lou Lumenick describers it in the New York Post . Peter Hartlaub in the San Francisco Chronicle predicts that young girls "will lose their minds" when watching the film "although that would have happened if the film consisted of an hour and 45 minutes of Bieber brushing his teeth." And David Malitz concludes his review in the Washington Post by asking rhetorically, "Will the squealing teenage girls, the ones who profess unending love during preconcert interviews and openly weep when he sings and gyrates onstage, stand by him even when his voice changes and a new sensation comes along with an even cooler haircut? It's hard to say." Several critics, while also reserving judgment on its star, grudgingly give the film passing marks. " Never works as a gum-snapper concert movie and does provide a glimpse into instant stardom in the Twitter generation," writes Scott Bowles in USA Today . A.O. Scott concludes in The New York Times , "Everyone involved in Never Say Never is working overtime to prove that he is, as one of them puts it, 'just a regular kid who had a dream,' while everything about the movie screams the opposite." But Elizabeth Weitzman in the New York Daily News gives parents the most pertinent advice, while restraining her own critics' proclivity to be dismissive of such goings on. "This is not a place for cynicism," she writes. "Bieber's world -- at least as edited for mass consumption -- is a refreshingly wholesome universe, where a young superstar is good-natured and grateful, says grace before every meal, and spends all his free time on the tour bus tweeting. He also likes to hug, a lot. In other words, he's the perfect first crush, and this is the perfect movie for someone currently experiencing that crush."