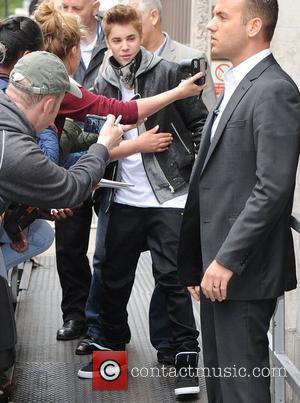 Justin Bieber is getting closer to signing on the dotted line for Mark Wahlberg's forthcoming basketball movie. The teen sensation has already spoken of his desire to join the project, though Wahlberg insists the singer will not be sent the script until it's perfect, reports MTV News.
Oscar-nominated Wahlberg explained "The Bieber movie? I saw 115 pages.Just waiting - I want to send it to them once it's perfect". It seems as though Justin's team are also waiting for the final draft, with Wahlberg adding, "I sent [Bieber's manager] Scooter [Braun] a text ...The last time I talked to him, I said, 'Hey, I need Justin to do me a favor.' He goes, 'Not without the script.' So, it's a process. Cutting those albums and doing those videos is easy, building a movie career is a difficult thing". The actor and director had previously suggested the film would be influenced by Martin Scorsese's 'The Color of Money', in which Paul Newman's character teaches a cocky but talented pool player played by Tom Cruise, how to hustle successfully. In the basketball movie, Bieber would portray a rookie player with Wahlberg as his mentor. Back in May, Justin explained, "I'm still working on this movie with Mark Wahlberg.I don't know what the deal is. Turns out they're rewriting the script or something, trying to make it fit better and stuff".
Bieber's talent for acting remains to be seen, though his television appearances, particularly in comedy sketches, suggest Wahlberg might just be onto something.