Justin Bieber To Get 'The Simpsons' Treatment 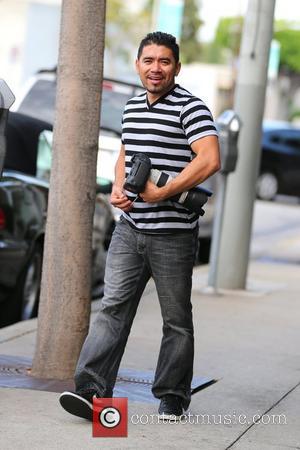 Picture: Paparazzo Jose Sarros who was involved in a scuffle with Justin Beiber on May 27 at the Commons in Calabasas, is seen working on a...

Justin Bieber is set to get ' The Simpsons ' treatment in an upcoming episode of the hit cartoon. The Canadian singing sensation - who was born after the show first premiered - will play himself in the episode set to air in 2013, reports Entertainment Weekly.
Executive producer Al Jean said, "It's a cameo.But all of his fans should watch every minute of the show, before and after he's on". Bieber, 18, first leaked news of the cameo on his Twitter page on Monday (August 20, 2012), telling his millions of followers, "Just did a voiceover for the Simpsons! Swaggy", before deleting the tweet (probably realising he'd just spoilt the surprise on a massive scale). An official statement soon followed, with Jean explaining a little more about Bieber's role, saying, "He tries to get into a talent show that Bart is playing piano in and they won't admit him.Draw your own conclusions". The episode is titled 'The Fabulous Faker Boy'.
Other high profile guests to appear in the new season - which begins on September 30, 2012 - include Ed Norton, Steve Carell, Zooey Deschanel, Anne Hathaway and Natalie Portman. In October 2011, the show was renewed for a further two seasons, despite a contractual dispute that threatened the future of the program. 'The Simpsons' shorts became a part of The Tracey Ullman Show on April 19, 1987, seven years before Bieber was born.