Justin Bieber’s Tardiness At London 02 Earns Him Some Enemies

It's the Late Show... with Justin Bieber 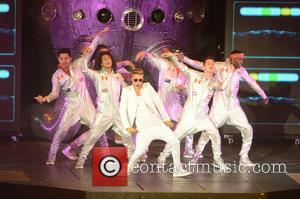 Picture: Justin Bieber - Justin Bieber performing live on stage his 'All Around The World' tour at the O2 Arena - London, United Kingdom - Monday...

The overwhelming opinion from last night’s Justin Bieber gig at the 02 Arena in London was one of anger; Bieber was two hours late on stage, offered no reason why – no apology – just strolled on and did his show.

His main detractors were the parents, who chaperoned their kids, probably reluctantly, to the 02 Arena, hoping to be back by midnight so the little ones wouldn’t be too tired for school the next day. Many tweets were sent, to Bieber’s official account and to The 02’s, but it wasn’t until 10:24pm that the teenage stropper finally came out to appease all the teenagers, stropping. It was a strop-fest, that’s what it was. "Justin Bieber is now on stage and apologises for the lateness of his show," 02 tweeted. "Sorry to all the Justin Bieber fans for the lateness of his show tonight. The Tube will still be running when the show finishes" they added, desperately trying to calm the legion of angry mothers and fathers. And the lateness was reflected in reviews. The Telegraph, who could only award JB 2.5 stars said, “Approaching his late start with a ‘never apologise, never explain’ attitude he subsumed the pre-show booing into a slick, well-oiled arena show that borrowed much from the Leni Riefenstahl school of visual bombardment.

The review went onto say, “The narrative to the show hinged upon Bieber’s new haircut and more mature musical direction. The trousers were certainly slung lower, the torso more exposed, the voice a little deeper and the hair more sharply coiffed than when I saw him two years ago.”