Justin Bieber has followed in the footsteps of Mark Wahlberg and Kellan Lutz by becoming the face of a Calvin Klein underwear campaign. 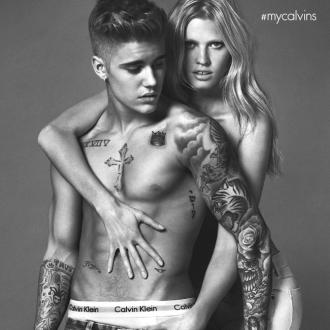 Justin Bieber is the new face of Calvin Klein underwear.

The 'As Long As You Love Me' hitmaker revealed his partnership with the brand by posting several steamy images - shot by famed fashion photographers Mert Alas and Marcus Piggott - on his Instagram page.

The 20-year-old hunk follows in the footsteps of movie stars Mark Wahlberg and Kellan Lutz who have both previously posed for the brand.

The star is joined in the #mycalvins campaign by model Lara Stone, who is seen caressing his torso in the black and white images which show off his chiselled physique and tattooed skin.

The 31-year-old blonde beauty - who is married to comedian David Walliams - also poses alongside the musician in a six second promotional clip for the underwear label, and is seen being pulled in for a kiss from the 'Boyfriend' singer in the short advert.

Alongside an intimate shot of the pair, Justin teased there may be more to come from his modelling career in 2015.