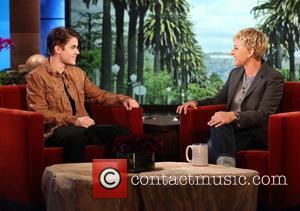 Justin Bieber has teased fans about a possible new "supergroup" after hitting the studio with Maroon 5 frontman Adam Levine.
The Baby hitmaker took to his Twitter.com page on Tuesday (13Mar12) to tell followers he is working on a new project with the rocker.
He tweeted, "Long night in the studio. Good seeing big bro Adam Levine - we got a big idea coming! new supergroup," and later added, "Adam Levine I don't think the world is ready for this supergroup."
Bieber is currently putting the finishing touches on his third studio album Believe, due to hit shelves in summer (12).