Justin Bieber is so paranoid about a crazed fan breaking into his hotel room, he employs a security guard to sit with him while he sleeps. 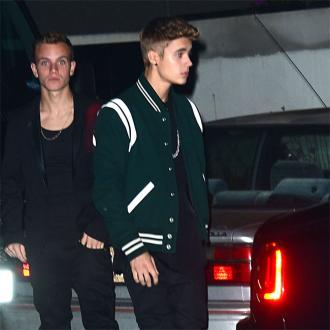 Justin Bieber insists on having a security guard watch him sleep.

The 19-year-old singer is reportedly growing increasingly ''paranoid'' about crazed fans breaking into his hotel room so has employed a 24-hour ''army of giants'', and even has two in reserve to cover when his regular minders need breaks.

''He is paranoid about fans breaking into his room, and he hears noises all the time.

''It freaks him out. As well as the ever-present guard in his room and the one outside, he also has two on standby to take over when his men need breaks.

''All of the burly guys are around 6ft 5in tall and weigh around 250lb.

''He wants an army of giants protecting him.''

And even when the 'Believe' singer's world tour concludes in Australia next week, he has no plans to ease off his tough security arrangements.

The source added to the Daily Star newspaper: ''Justin is now used to having a guard watch him sleep and he wants the arrangement to continue after the tour finishes.''

Despite being protected by burly security guards, this hasn't been enough for the teenage star - he also ''begged'' his mother Pattie Mallette - who recently released a book, 'Nowhere but Up: The Story of Justin Bieber's Mom' - to accompany him on the road for extra reassurance.

The source said: ''He also begged his mother Pattie to accompany him on most of the concert dates.

''She was asked to combine her book signing tour with his gigs because he gets so anxious.''