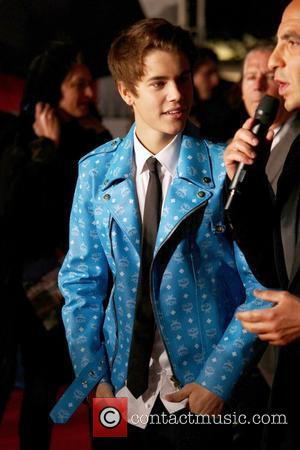 Justin Bieber knows how to tease his female fans, the 17 year-old mega star giving those gathered outside the studio where he's currently recording his forthcoming album a glimpse of his upper torso whilst stopping out for a mid-session skateboard break. UK newspaper The Daily Mirror reports that a fan-made YouTube video shows Bieber skating on his balcony, apparently unconcerned by the fact there are tens of screaming girls down below.
In the video, Bieber doesn't exactly look thrilled to see the girls there - one girl shouting "At least give us a wave, Justin!" - but he does at least recognise their appearance -electing to take his top off whilst going up and down the runway that's situated conveniently right next to the studio. The video ends somewhat comically with one girl shouting "Security! Security are coming!"
Bieber is currently recording the follow up to his full debut LP 'My World 2.0.' A huge success, selling almost 5 million copies worldwide it set the youngster on his way to superstardom, meaning that by the time of last winter's Christmas covers and duets collection 'Under The Mistletoe,' he could call on the likes of Boyz II Men, Usher and Mariah Carey to collaborate with. This next album already has a title, 'Believe,' and it's scheduled to come out in the summer of this year.