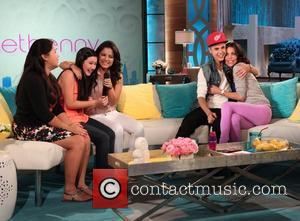 Justin Bieber gave a fake name to police dispatchers after phoning 911 to report that he was being chased by the paparazzi. The singer claimed his name was 'Justin Johnson' and that three cars were following him through the streets of Los Angeles, reports Tmz.com.
Bieber had earlier been pulled over by police for speeding in his Fisker Kama electric sports car, though told them he was trying to evade the paparazzi. However, local councillor Dennis Zine says he witnessed the chase and that the whole thing was a "tragedy waiting to happen". Mr Zine said the chase went on for 15 miles and ended when highway patrol officers pulled over Bieber for speeding. The councilman added that the Canadian pop-star was driving in excess of 100 mph, saying, "I didn't know it was Justin Bieber until later.He was going from the fast lane to the slow lane to the shoulder in traffic. It was a very dangerous driving situation. I figured someone was going to crash, so I called 911". Mr Zine nevertheless said he understood the problems celebrities have with paparazzi and even sponsored a city law to curb the aggressive behaviour. However, hinting that Justin was in the wrong, Zine added, "Anytime you do 90, the paparazzi are going to go 90".
It's the latest run-in with the law for Bieber, who was investigated in May following a complaint that he roughed up a photographer who was taking pictures of him outside a suburban shopping center.