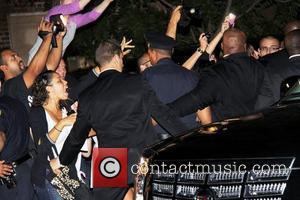 Justin Bieber is the latest of a number of celebrities to rave about The Beatles first ever digital album. The legendary group's 'No. 1s' record became available on iTunes on 6th September 2011 and stars of the stage and screen have been catching up on such classics as 'Something', 'She Loves Me' and 'Help!'.
Beatles fans were thrilled in November 2010, when former Apple boss Steve Jobs announced he had struck a deal to bring the Liverpool group to iTunes. Following the release of 'No.1's', the album immediately became a trending topic on Twitter, thanks to the likes of Bieber who told followers, "Listen to #Beatles song She Loves You #epic #MyBeatles1". A flurry of musicians began tweeting their favourite song by the band, with British rockers Coldplay tweeting, "#MyBeatles1 is Something. Harrison came along and wrote the best song of the lot". Soul singer Beverley Knight opted for the 1965 hit 'We Can Work It Out', explaining, "I have had the pleasure of performing it onstage myself and it is a simply a brilliant example of an advanced song structure made to sound easy. During an interview with MTV News in 2010, Bieber's mentor Usher compared the 17-year-old pop star to the legendary hit-makers, saying, "You haven't seen the best of him. He is a pop craze like The Beatles. They started out as pure pop artists and look what they became over the years".
Justin Bieber is currently on a brief musical hiatus before starting work on his second studio album.
Visit our Facebook page for a chance to Win a SIGNED Justin Bieber Poster