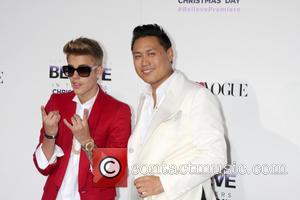 Justin Bieber has been criticised by People for the Ethical Treatment of Animals (Peta) activists for choosing to buy a puppy from a pet store instead of rescuing a dog from a shelter.

The Baby hitmaker added a new member to his family on Thursday (26Dec13) after a Bulldog named Petey caught his eye while visiting a shop in Stratford, Canada, but his actions have raised eyebrows among animal rights activists, who have accused the singer of failing to set a good example to his millions of fans.

Daphna Nachminovitch, Peta's Senior Vice President of Cruelty Investigations, tells Wenn: "Whether or not reports are true that Justin Bieber purchased a puppy from a pet store for $600, Peta wants to remind everyone that when you buy a dog or cat from a pet store or breeder, you sentence an animal in a shelter to death.

"Six to eight million homeless animals enter shelters every year, and half of them must be euthanised for lack of a good home, so there is no excuse for buying an animal, no matter who you are."

Bieber hasn't had a great track record with pets - a hamster he previously gave away to a fan died, while his capuchin monkey, Mally, was confiscated by German border officials in March (13) after he failed to obtain the proper permits to enter the country with his furry friend. Mally was subsequently placed in a zoo after the singer decided not to reclaim the primate.

However, Bieber is paying no attention to the latest pet controversy - instead, he and his dad, Jeremy, have reached out to fans online to help them rename the dog.

On Friday (27Dec13), the star reposted a message from Jeremy Bieber via his Twitter.com page, which reads: "So were gona (sic) let one lucky belieber (fan) name @justinbieber's new puppy.... Follow and find out how it can be you".