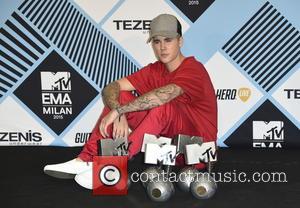 The What Do You Mean? singer appeared on the red carpet without plugs in his ears and visibly cringed when fans started screaming. He then told presenter Sway he had recently hurt his right ear by falling into the water awkwardly during a wakeboarding session.

Bieber, who performed at the show, could be seen wearing the yellow plug in his ear throughout the ceremony in Milan, Italy.

The pop star had a similar issue last year (14). At the time, he told fans on Twitter.com, "Busted my ear drum cliff diving. Doc says might need surgery now. Sucks."

Bieber picked up five awards at the MTV EMAs to dominate the awards show.