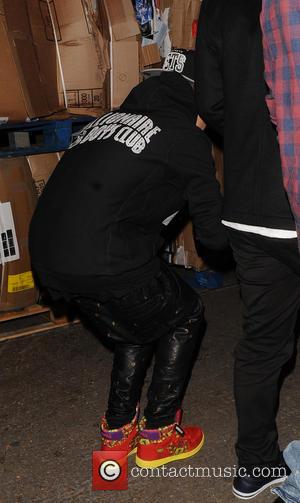 Picture: Justin Bieber - Justin Bieber leaves Vue Cinema in Fulham via the loading bay after watching the movie Django. He started to crouch when trying...

The singer was booed by fans who expected him to hit the stage at the O2 Arena at 8.30pm, and some furious concert-goers took to Twitter.com to vent their frustration.

One tweeted, "Someone needs to buy Justin Bieber an alarm clock - or give him a boot up the bum. 90 minutes late on stage on O2 on a school night... poor," while another added, "Think of the children... Bieber concert at the O2 due to finish in 5 minutes, he's not even on stage yet."

A spokesperson for the O2 Arena posted an apology on the social-networking site, but failed to give a reason for the singer's tardiness.

A post on the venue's official Twitter page at 10.36pm stated, "Justin Bieber is now on stage and apologises for the lateness of his show."

The O2 representative later added, "Sorry to all the Justin Bieber fans for the lateness of his show tonight. The Tube (underground train) will still be running when the show finishes."

Monday's show marked the first of four sold-out shows Bieber is playing at the O2 Arena in the British capital.

The concert follows a miserable 19th birthday weekend for Bieber - a night out at London's Cirque du Soir nightclub on Friday (01Mar13) was marred by what he called "overly aggressive dummies". He took to Twitter to tell fans the party was his "worst birthday" ever.