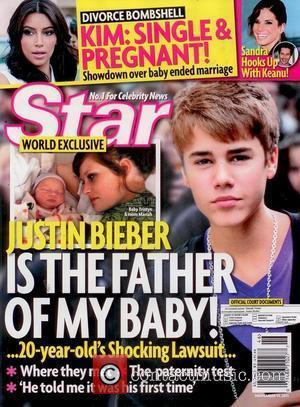 Picture: Justin Bieber appears on the cover of Star magazine USA - 02.11.11 Supplied by WENN does not claim any ownership including but not...

Justin Bieber may have told Twitter followers to "ignore the rumors" about the 'baby mama' story doing the rounds, but it wasn't enough for Jimmy Fallon to keep quiet, reports the New York Daily News.
The television host spoofed the story on his show on Wednesday evening (2nd November 2011), performing a version of the 17-year-old's biggest hit 'Baby', though renaming it (It's Not My) Baby. Wearing the star's signature baseball cap, leather jacket and dog tags, Fallon took to the stage for the updated version of the song. The host sent the audience into frenzy, singing the reworked lyrics, "You said we did it, and I'm a dad. My lawyer's tripping, cause this looks bad. You only said this to get my cash. Now Selena Gomez is going to kick my ass.It's not my baby, baby, baby. Oh-oh, it's not my baby, baby, baby". In a second verse unlikely to please 'Team Bieber', Fallon quipped, "You said I didn't use protection, I only lasted 30 seconds. But that's not true. No that's a lie. It was totally more like 45". The story first surfaced earlier this week, with tabloids reporting a 20-year-old woman had filed a serious paternity lawsuit alleging Justin was the father of her 3-month-old child, following a romantic tryst backstage at the Staples Centre.
The 17-year-old, who appeared on Fallon's show in April 2010, is yet to comment on the spoof but told Twitter followers on Wednesday, "Im going to ignore the rumors...and focus on what is real.an opportunity to help by doing what i love. Judge me on the music! Love yall!"
Visit our Facebook page for a chance to Win a SIGNED Justin Bieber Poster