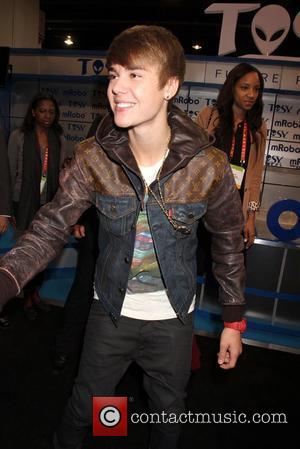 Justin Bieber and his girlfriend Selena Gomez have both been sporting new hairstyles this week. Bieber made an appearance at the International Consumer Electronics Show, where he unveiled the new Tosy mRobo Robot - a portable speaker that transforms into a robot and dances to the beat of the music. Not one to be upstaged by technological advancement, Justin had brought back his familiar sweeping fringe. His trademark hairstyle has been notable for its absence, recently, as he played with a more cropped & feathered look for his Christmas album.
Selena Gomez, meanwhile, has tweeted a picture of herself sporting sapphire and amethyst coloured hair extensions. According to a report from People's 'Stylewatch' section, Gomez had the Great Lengths 3-D extensions put in at the Nine Zero One beauty salon in West Hollywood. "Change is good," she stated in an accompanying message. The TV personality Lauren Conrad has also been sporting multi-coloured hair recently, as has Kate Bosworth, whose blonde hair was dip-dyed turquoise last summer.
Justin Bieber and Selena Gomez's relationship has been under scrutiny recently, as Bieber has been defending his honor against claims that he has fathered a child with Mariah Yeater. Yeater has now dropped the lawsuit against him. Gomez spoke of her relief, on Ellen Degeneres' chat show.