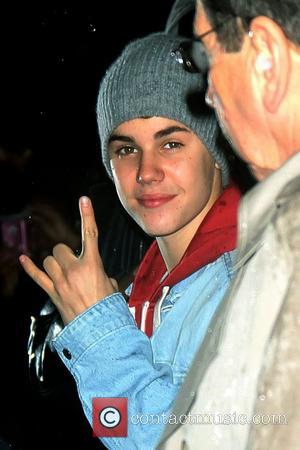 Justin Bieber served up a Thanksgiving treat for fans in New York on Wednesday (23Nov11) by performing with his mentor, R&B superstar Usher, in the heart of Manhattan.
The teenage pop sensation brought traffic to a standstill around Rockefeller Plaza as police closed off roads due to the huge crowds of fans who had braved the rain in a bid to get as close as possible to the Baby hitmaker.
And Bieber did not disappoint - he opened the special TV performance for U.S. breakfast show Today with Never Say Never and brought a little festive cheer to the city as he introduced his mentor Usher to the stage for a rendition of their festive duet The Christmas Song (Chestnuts Roasting on an Open Fire).
He also performed Mistletoe and other tracks from his hit holiday album Under The Mistletoe.
The star's outdoor concert drew the biggest crowds in the Today show's history - an estimated 9,000 people turned out for the gig, with many camping out in the cold for up to two days before the event.
Expressing his gratitude for his fans' devotion, he said, "These girls have dedication that I've never seen before, more than anybody, so they really inspire me...
"It's powerful to think that someone and so many people can love you so much, I just feel so loved."
Taking to Twitter.com after the gig, Bieber wrote, "so blessed! thank you to all the fans who camped out for days for the @Todayshow this morning!! Had to bring out big bro @UsherRaymondIV!!"