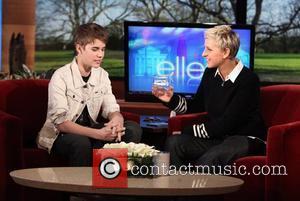 Picture: Justin Bieber appears on NBC's 'The Ellen Degeneres Show' showing off his new haircut USA - 23.02.11 This is a PR photo.

Teen superstar Justin Bieber is planning a low-key affair for his 17th birthday next week (01Mar11) - he'll spend the day relaxing with family and eating his grandma's cheesecake.
The Baby hitmaker turns a year older on Tuesday (01Mar11) but he's not planning to follow-up his 16th birthday with any party plans.
Last year (10), Bieber was treated to a brand new car by his mentor Usher and held a Sweet 16 bash for friends, who took part in activities including paintball, sumo wrestling and laser tag.
But the singer is refusing to party this year - because he wants to spend his time off with relatives before heading out on his world tour, which kicks off on 4 March.
He tells Entertainment Tonight, "I only have, like, four days (off), so I'm just going to relax because I start my world tour - so (I'm) just going to mentally prepare and just relax. No birthday bash... Hopefully my grandparents will be out here and I'll be able to spend time, a little bit, with them. My grandma makes the best cheesecake - cherry cheesecake. She made that for my 13th birthday."