Bieber's Web History? Justin Bieber has been left laptop-less after a thief swiped some of his most treasured belongings during a gig in Washington state. The pop superstar told Twitter followers that both his laptop and camera had been stolen! 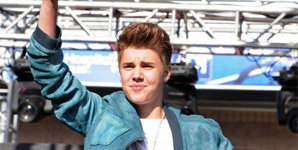 Who Has Julianne's Diamond? Julianne Moore became the latest celebrity victim of theft this week after jewellery worth $127,000 was stolen from her Manhattan home. It begs the question, does anybody really need that many diamonds!?

The Brits Are Coming! Mumford And Sons capped off a huge year for British artists in the U.S this week by claiming the No.1 spot on the Billboard 200 with 'Babel'. The band's second album sold well over 600,000 copies in a week, smashing the record for 2012 set by Justin Bieber. Good Morning, Anne: How did the Romney camp swing this gig? Mitt's wife Anne hosted Good Morning America this week, and, well, seemed to do a pretty good job of it. The potential First Lady talked dancing, shared recipes and continued GMA's dominance over rival, The Today Show.

Hannah Behind Bars: Kill Bill star and activist Daryl Hannah was arrested in Keystone last week for criminal trespassing. She and another woman were protesting against an oil pipeline.

Concert Date: Obviously our entertainment roundup wouldn't be complete without news of Rihanna and Chris Brown. This week, they were snapped together at one of Jay Z's triumphant shows at Brooklyn's Barclays Arena; looks like things are moving forward, doesn't it?