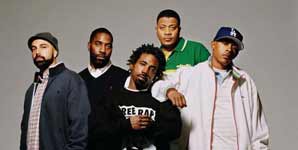 Contactmusic.com recently caught up with Nu Mark from Jurassic 5 to chat about the new album.

How are you doing?
We're doing great, just rehearsing and getting ready for the next push.

You're over in the US at the moment, are you purely focusing on finishing the new record or are you doing the odd show too?

We finished the record and just completed the video for our first single called "Work it Out". We're getting ready to hit 62 cities on this upcoming tour.

You're definitely very pro-active when it comes to touring in the US, it's just a shame we don't get to see more of you here in the UK! Have you got plans to tour the new album when it's released over here?

We always tour the UK heavily. You guys broke us. We'll begin our tour late September in the UK. Check our web or myspace page cause there's a lot of dates on there even in Spain!!

We've been told very little about the new album over here, can you let our readers know what's to expect?

We decided early on in the creative process to incorporate outside producers and vocalist on this album because it's our 4th release and 3rd major label release. I think in the past we felt the importance to stand on our own two feet by simply involving just our core group. Now we think it's important to grow with the times and branch out a bit. We worked with Salaam Remi (producer for Fugees and Nas), Scott Storch, Mos Def, Dave Mathews and Exile (one of the producers from Mobb Deep). I produced seven songs on the new album. Very diverse sounding record!

When did you start work on the new album?

We've been workin on the new record on and off since 2003 in between our tour schedule. We take our time in the creative process.

Being a group of five people, who is usually the instigator when it comes to writing new material? Do you all get together right from the start?

The mc's all contribute equally for the most part. Each song is approached very different in it's technique and execution. This album is the most dynamic reocord we've ever put out.

Creative difference must have come in to the picture at some point, how do you settle any problems?

We're like brothers at this point in our carreers. We've been a group for 13 years and have had to learn to communicate in order to settle differences. We've found that arguing sometimes is the best medicine to problems.

It's hard to believe you guys have been around since 1993 when your records still sound so fresh yet original, when it comes to writing new music, do you guys ever find yourself covering old territory?

It's always a challenge to keep the vibe fresh and not cover the same material. We all try to keep pushing forward without being repetitive. I'm not sayin we've never repeated a topic from time to time but our effort is always put in.

Nelly Furtado featured on Power in Numbers, have you asked anyone to collaborate on this album?

The West coast underground are where your roots really lie, what's going on with that scene now? Has the whole scene developed like Jurassic 5 or has it remained independent and much like when you broke through?

To tell you the truth I couldn't tell you what an underground record really is these days. In the early 90's I was able to list off underground groups with ease. Coming from LA I think Cypress Hill might really be the only crew that's still makin things happen musically from our neck of the woods. Other than that I'm at a loss for crews that came out of that LA scene that are successful.

When you guys aren't making music what are some other passions you have?

I know Chali likes to paint, Soup loves to go to movies, I'm pretty much diggin for records or re-vamping my studio to make it solid. I'm not sure what Akil and Marc do for fun these days.

You're proven to be great musicians, what aren't you so good at?

I'm terrible at remembering dates and names. Plus I can't stand to organize things like dentist appointments. I'm kind of a mess when things aren't music related. I loose interest and usually drop the ball. I also hate the microphone and really don't need or desire the attention of being a front man.

Do you still 'chill on the stoop'?

No. We don't have a stoop anymore to chill on. We chill on a tour bus and the studio.

Why do you think your sound has lasted so long, when contemporaries have fumbled and dispersed?

Our stage show is what sets us apart from the others. We take great pride in our show. It's how we make ends meet plus it's opened the door for us to play with a wide gamete of artist (Outcast, Tribe Called Quest, Run Dmc, Nelly, Bruce Springsteen etcâ¦. the list never ends. We enjoy what we do and try to never take it for granted.

We're on tour in September in your town then on to other cities and maybe we'll be back in the studio again trying to out do this record. 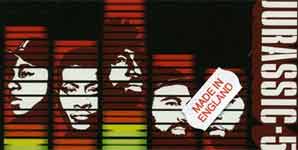