By taking a warm, witty approach to a rather outrageous situation, Canadian filmmaker Ken Scott helps us see past the plot holes to the underlying emotional resonance. And the result is a startlingly engaging comedy that not only keeps us laughing but also gets us thinking about what parenthood really means. 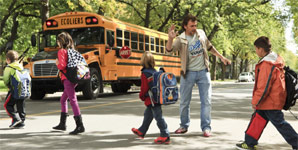 The story centres on an irresponsible Montreal butcher, David (Huard), who works for his dad (Ovadis) and does as little work as he can. His pregnant cop girlfriend (LeBreton) has finally had enough of this and tells him she wants to raise their child on her own. Then he discovers that after donating sperm nearly 20 years earlier, he has fathered 533 children, and 142 of them have filed a lawsuit to discover the identity of their donor "Starbuck". With a lawyer friend (Bertrand) fighting to protect his anonymity, David decides to find out more about these young people, working his way into their lives as a kind of guardian angel. Which of course sparks a sense of paternal responsibility.

The script focusses on human interaction rather than trying to make the premise believable. There's no mention that these young people actually have families of their own (one reference to "adoptive" parents is actually offensive). And the events in which David gets involved in the lives of his "children" aren't entirely plausible. But Huard gives David a scruffy charm that's infectious: we can understand why these strangers warm to him. And even as the script throws all kinds of obstacles in his way (including the global press getting hold of the story), we know he'll manage to make it through and probably triumph in the process.

David Wozniak is an irresponsible 42-year-old delivery man for a butcher's shop who is thousands of dollars deep in debt and maintains a rocky relationship with a young police woman called Valerie who believes him to be an immature slob. When she falls pregnant, she and David both have mixed feelings about whether or not he could really father a child but soon things take an even more dramatic turn when he is visited by someone who informs him that, following a spate of sperm donation that David took part in in his youth under the name Starbuck, he now has 533 biological children with 142 of those desperate to meet the real Starbuck and are willing to sue the fertility clinic to do so. Originally desperate to avoid the situation, his curiosity gets the better of him when he is posted details of the profiles of his 'children'. His discovery that he is the biological father of a popular footballer entices him to find out more about the others and he begins to follow them covertly to look into their lives against his best friend and lawyer's advice.

This bizarre comedy has been directed by Ken Scott ('Sticky Fingers', 'Seducing Doctor Lewis') who also co-wrote it with Martin Petit in his feature film screenwriting debut. It is set to be released in the UK on November 23rd 2012.

By Norm Schrager
Good
Starting off as a chilly meditation on race and skin color, White Skin twists into something unexpected. It would be unfair to give away the film's narrative development, so let's just say that the movie's midnight slot at the Independent Film Festival of Boston was appropriate. More appropriate is that this previous fest award winner appears to be a love/obsession story only on the surface -- as the plot unravels, "surfaces" are what the film is all about.

Still, it's not what you may think. First-time filmmaker Daniel Roby introduces us to Black, streetwise Henri (Frédéric Pierre) and naïve White country boy Thierry (Marc Paquet), Montreal roommates who visit a pair of prostitutes in the film's first sequence. Nervous Thierry isn't interested, but confesses to his dame that he abhors redheads, that their pale skin makes him "want to vomit." Meanwhile, in the next room, something seriously bloody is going down with Henri and his redheaded hooker.

By taking a warm, witty approach to a rather outrageous situation, Canadian filmmaker Ken Scott... David Wozniak is an irresponsible 42-year-old delivery man for a butcher's shop who is thousands...