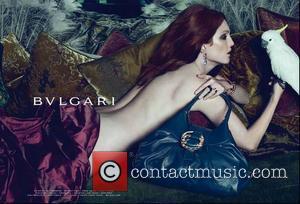 Picture: Julianne Moore appears in the new Bvlgari 'Eccentric Charism' spring summer 2010 ad campaign. This is a PR photo. WENN does not claim any...

Actress Julianne Moore was thrilled to get the chance to return to the U.S. TV soap where she began her acting career - so she could thank her old castmates and friends before the show was axed.
The Hours star, who played sisters Frannie and Sabrina Hughes on As The World Turns in the mid-1980s, was upset when she heard the long-running show was ending and signed up to appear in one of the final shows.
She tells WENN, "There is no time continuum in soaps, so I just came back as one of the sisters. The other one was stuck somewhere else!
"As The World Turns was my first big job and everyone was wonderful and incredibly professional and very supportive and loving. It was a great job for me, so when they said the show was ending it was incredibly sad because you don't want to see anything end like that.
"I was happy to go back and glad to be there near the end of it. I was glad to see the people who played my parents and the woman who played my sister and to see a couple of the crew members who were still there. It was cool to be able to have that opportunity and to thank people."