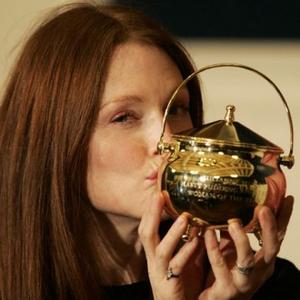 Julianne Moore will portray Sarah Palin in a new film.

The Oscar nominated actress will portray the US Republican politician in HBO Films' 'Game Change', which follows the 2008 presidential campaign.

Former Alaskan governor Sarah was picked to run for vice President by John McCain, the Republicans' candidate for president.

The movie charts them on the election trail until their ultimate defeat against current president Barack Obama at the polls.

The film is based on the bestselling book of the same name by John Heilemann and Mark Halperin and will be directed by Jay Roach. The Script has been adapted by Danny Strong.

The role of Sarah is pretty far from Julianne's own political views, as an outspoken liberal who backed Obama during his campaign.

The 'Boogie Nights' actress' career has seen her pick up many awards and accolades, including nominations for four Oscars, six Golden Globes and three BAFTAs, and she was also recently honoured by Harvard university as their Hasty Pudding's Woman of the Year, given to entertainers who have made a "lasting and impressive contribution to the world of entertainment".

In announcing the honour, Hasty Pudding spokesperson Learah T. Lockhart said: "Julianne Moore has made a lot of bold choices in her career. She has acted in everything from movies to independent films to theatre to television. She has even authored two children's books."

It is not known if 'Game Change' will be made exclusively for TV, or given a theatrical release.