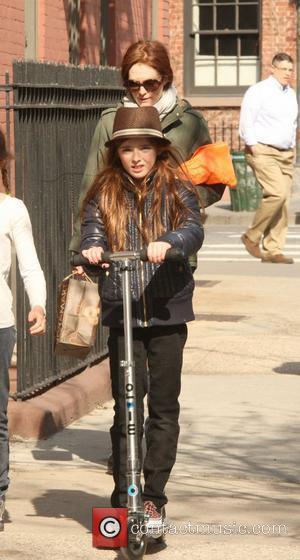 Picture: Actress, Julianne Moore and her daughter, out and about in New York City New York City, USA - 09.04.11

Julianne Moore's daughter Liv took to the streets of New York this week, to take her pet pooch for a walk around the block. The 10-year-old looked the spitting image of her Hollywood mother, who walked by her side as if to hammer home the startling likeness to nearby photographers.

Liv has certainly inherited her mother's red hair and porcelain skin: it's basically a tiny little Julianne Moore walking around New York, which is a bit weird really. The 10-year-old, whose father is film director Bart Freundlich, is Julianne's only daughter though the couple also have a 15-year-old son, Caleb. In the harsh East Coast weather, Moore wrapped up in a knitted beanie hat, jacket, scarf, fingerless gloves and black boots, while daughter Liv opted for a puffa-jacket, jeans and simple tennis shoes.

After a stunning turn as Sarah Palin in Game Change, Moore is currently shooting the thriller Non-Stop with Liam Neeson. She also stars as the deranged mother of Chloe Moretz's Carrie in the highly anticipated horror remake and will appear in the porn-addict comedy Don Jon's Addiction, with Scarlett Johansson and Joseph-Gordon Levitt. However, perhaps her most intriguing project lies with Dan Fogelman's Imagine, about an old letter written by John Lennon and Yoko Ono to an aging musician which prompts him to reconnect with his son. The movie also stars Al Pacino and Jeremy Renner (probably not as John and Yoko).