Julianne Moore On The Challenges Of Playing Palin 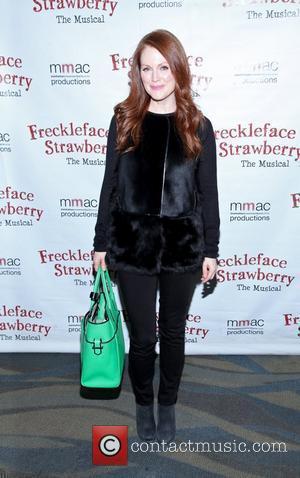 "Oh My God, what have I done?" This, apparently, was Julianne Moore 's first thought when she hung up the phone after agreeing to play the role of Sarah Palin in the forthcoming movie, Game Change." Speaking to LA Times, the Academy Award-nominated actress described the pressure involved in portraying the role of Sarah Palin; a feat for which she and the filmmakers have been criticised and praised in equal measure - before Game Change has even been released.

"To play a historical figure is one thing," said Julianne. "To play a living historical figure deepens the challenge. But to play a culturally significant, very prominent, living figure, that kind of put it over the top." She was keen to get it right, though and worked with a vocal coach almost every day for two months, trying to perfect Palin's lilting accent. She reportedly cleared her calendar and wiped her iPod, replacing her favourite tunes with recordings of Sarah Palin's audiobooks. Her constant consumption of Sarah Palin YouTube videos apparently caused her concerned son to ask if something was the matter with her.

Game Change has been based on the best-selling book of the same name, by Mark Halperin and John Heilemann. Palin was originally invited to take part in the pre-production process but she refused, via her lawyer. This led the director Jay Roach and screenwriter Danny Strong to the Game Change book, which became the lens through which the Palin story was told. In response to Palin supporters who are critical of the movie, Moore is keen to stress that Game Change is simply one version of the story; no more valid than any other: "every experience is refracted through somebody's own worldview. It's that [storyteller's] truth."