Julianne Moore enjoyed her time with Steve Carell on 'Crazy, Stupid, Love' because he still ''humble'' despite his ability to connect with an audience. 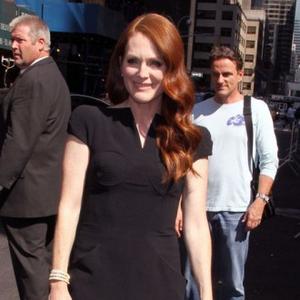 The four-time Oscar nominated actress - who is well known for her film roles as a struggling mother in movies including 'The Kids Are All Right' and 'The Hours' - plays Steve's wife Emily in romantic comedy 'Crazy, Stupid, Love', and she admits she enjoyed the chance to work with him because of his "soulfulness".

She said: "It's so easy working with him. He's got a real soulfulness and the ability to connect with an audience. And he's so humble about it. That's what's funny about him."

In the film the 50-year-old star plays a parent who is going through a marital crisis and the mother-of-two felt that having her own family helped her connect with her on-screen husband.

She added: "We have a lot in Common and were able to talk a lot about our families and other regular stuff. In this movie, I don't think my character wants out of the marriage or out of motherhood. She just wants something different in her life. It's the woman who goes through a midlife crisis this time.

"I've realised over the years - from my own marriage and what I've heard from others - that a successful marriage can really survive a lot. And I agree that every child deserves parents that have a sense of responsibility to them and to that family. You have to allow a marriage to withstand a lot if it's going to be a part of a family unit."