Actress Julianne Moore Has Launched An Initiative To Improve Gun Safety In America With The Help Of Celebrities Including Reese Witherspoon, Gwyneth Paltrow And Jennifer Lawrence. 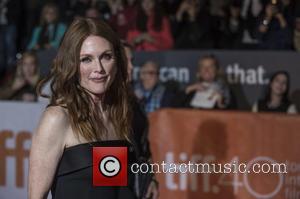 The Still Alice star has teamed up with gun violence prevention organisation Everytown to create the Everytown Creative Council, which is comprised of members of the creative community calling for better gun safety and regulation.

Julianne decided to take action after her young daughter Liv asked her about the 2012 massacre at Sandy Hook Elementary School in Connecticut.

"She had her phone with her and she said, 'Mommy, did some kids get shot?'" she recalls. "I was like, 'I've had it.' I said to my husband, 'I've got to do something'. This is the one thing that I need to say something about. This is my responsibility as a parent."

Julianne hopes one day access to guns in the U.S. will be controlled by tighter regulations, and she wants supporters of her campaign to make their opinions heard.

"Call your state legislator, lobby for it in your own community. Talk about it culturally, too, there are plenty of gun owners who are interested in safety... I know people who own guns who have a gun safe because they have children in their house. These are responsible people. By talking about it, we can admit it's a problem and we can admit that we want to work together to solve it."

As chairwoman of the organisation, the Oscar winner called on her acting friends to join the council.

She adds, "I was going through my address book alphabetically. That's all I did. 'Please, are you interested,' and the response has been overwhelming, I'm so, so thrilled. Everybody feels this way about this issue.

"I feel like with gun safety, there have been many people who feel threatened by saying something but I don't think I'm saying anything that's unreasonable. With all of these rights that we have in our Constitution come a great deal of responsibility, and I think the founding fathers would agree with me."