Oscar Winner Julianne Moore Is Leading A Campaign Urging Falls Church, Virginia Officials To Change The Name Of Her Former High School, Which Pays Tribute To A Leading General In The Confederacy. 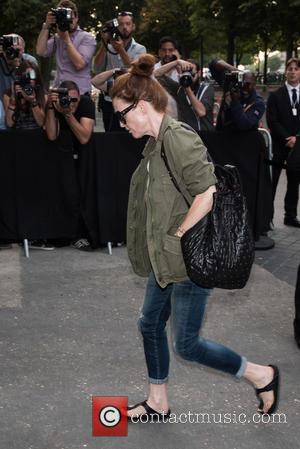 In the 1970s, the Still Alice star attended J. E. B. Stuart High School, named after a Confederate cavalry leader who was one of General Robert E. Lee's top commanders.

The school opened its doors in 1959, when Virginia officials were resisting efforts to integrate their schools.

But now, as controversy over the Confederate flag, which has become associated with racism in recent years, continues, Moore has taken the fight to the next level by launching a Change.org petition calling for officials to rename the school to honour America's first black Supreme Court Justice Thurgood Marshall.

Moore made her plea public in a statement to The Washington Post, which reads: "We name our buildings, monuments, and parks after exalted and heroic individuals as a way to honor them, and inspire ourselves to do better and reach for more in our own lives.

"It is reprehensible to me that in this day and age a school should carry and celebrate the name of a person who fought for the enslavement of other human beings. I think the students of this school deserve better than that moniker."

The movement first began in June (15), when students were moved to start the campaign following the massacre at a Charleston, South Carolina church, where Dylann Roof gunned down nine people. Following his arrest, images emerged of the gunman posing with the Confederate flag.

On the Change.org website, Moore and Cohen write, "We have the support of many current students... and former students..., as well as the Fairfax County NAACP and People Demanding Action. It’s time to rename J.E.B. Stuart High School. Please sign our petition to help us honor a true leader and hero by creating Thurgood Marshall High School."