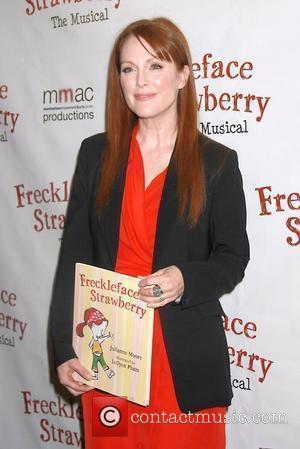 Julianne Moore stars as the former Governor of Alaska Sarah Palin in HBO's forthcoming 'Game Change' and a teaser trailer released on Thursday (December 22, 2011) ignited a debate over the best Palin impersonator - is it Moore or Tina Fey?
The forthcoming movie chronicles the governor's rise to become the Vice-Presidential hopeful in the 2008 election - which she and John MCCain eventually lost to Barack Obama. An ever polarizing political figure, many suggested Palin damaged the senator's campaign, though others claimed she should have gone up against Obama herself. Moore, who recently starred in romantic-comedy Crazy Stupid Love and indie-flick The Kids are Alright, joins a list of actresses and comediennes who have played Palin. Most notably, 30 Rock writer Fey parodied the politician on Saturday Night Live, receiving critical acclaim for her uncanny likeness. Although the teaser trailer only features snippets of Moore as Palin - she certainly looks the part and appears to have her mannerisms nailed down.
Game Change, directed by Jay Roach, is based on the bestselling book of the same name by John Heilemann and Mark Halperin. Veteran actor Ed Harris plays MCCain, while Hollywood star Woody Harrelson plays campaign strategist Steven Schmidt.