Julianne Hough is still head over heels in love with Ryan Seacrest and loves watching him on TV. 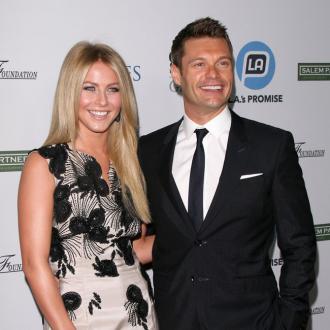 Julianne Hough still gets ''giddy'' when she sees Ryan Seacrest on TV.

The 'Safe Haven' actress is smitten with the 'American Idol' presenter and admitted seeing him on TV at the recent Grammy Awards made her heart skip a beat.

She told Us Weekly: ''I flew in from Nashville - I was at my sister's baby shower - and I walked in right as he was on and he looked so hot. He looked so cute! I got all giddy because it was super exciting to see my man on TV. I was so proud of him.''

Julianne, 24, says the 38-year-old TV presenter is romantic and knows exactly how to help her relax.

She said: ''I love having romantic things happen to me! I love fires, so anything to do with a fireplace and wine, I'm in.''

Julianne and Ryan have been dating for two years and while the couple are considering marriage, she doesn't want a huge bash.

She previously said: ''I always thought of who I'm going to be with the rest of my life and what my life is going to be like with that person.

''I was one of those girls when I was a kid that never really planned a wedding or thought of the big wedding day. A wedding to me is whatever, I mean, it's a cool party but I'm not a big wedding kind of person.''