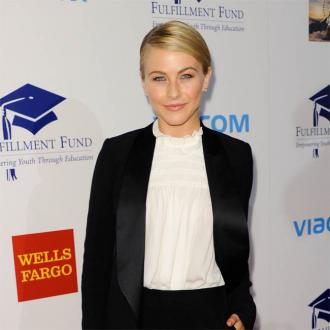 The 'Safe Haven' star and former professional dancer says her 38-year-old boyfriend of almost three years isn't intimidated by her dance moves and often surprises her with a few unique moves of his own.

The 24-year-old actress told 'Chelsea Lately': ''It's not good, but I mean, he does do it. He's really fun, you guys! I know he's Mr. perfect on TV and everything, but he's really, really fun.''

She said: ''There's a theme, actually. I ripped my dress at the Golden Globes because I was dancing too hard. I actually went to Minneapolis on tour for 'Safe Haven', actually, and we went to a strip club - Sasha actually split my pants. That's a whole other story, wow!

''And then we went to Ellen and Portia's birthday party. My skirt was kind of ripping a little bit, and Justin Theroux wanted to do breakdancing. I had a little alcohol in my system and I was like, 'You wanna go?' So Portia was running around the house trying to find some pants. I put some pants on and we went at it.''