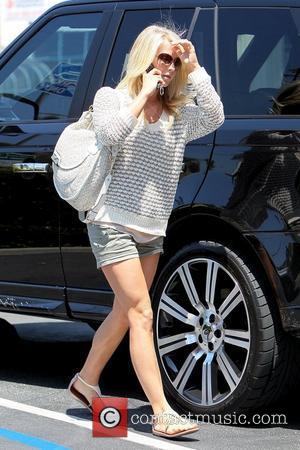 Julianne Hough and boyfriend Ryan Seacrest appeared to enjoy their romantic weekend in Miami, Florida, and were snapped smooching by the poolside at their exclusive hotel, reports the UK's Daily Mail. Hough and Seacrest were joined by the dancer's brother Derek Hough, their mother, and a female friend.
Wearing a polka dot bikini and multi-coloured top, Julianne dived in and out of the water before the American Idol host bent over the pool to plant a kiss on his girlfriend. The 22-year-old is enjoying a vacation in Florida after she and Seacrest made a joint visit to the Children's Hospital of Philadelphia in Pennsylvania on Friday to officially open a new technology suite. The facility, sponsored by Seacrest's foundation, helps young people through their medical conditions by introducing them to music and the media. Hough seemed excited by the visit, tweeting, "Having a very inspirational and emotional morning meeting kids at the Children's Hospital of Philadelphia". The dancer and actress is currently shooting the big-screen version of hit Broadway musical 'Rock of Ages', with British comedian Russell Brand, Hollywood star Tom Cruise and Malin Akerman.
Julianne Hough also plays the lead-role in the upcoming Paramount remake of 'Footloose', opposite Dennis Quaid. The movie is scheduled to hit cinemas on 14th October 2011.