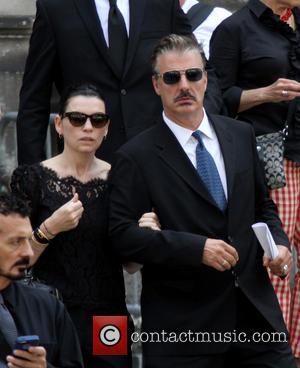 Picture: Julianna Margulies and Chris Noth - The funeral service for Emmy award-winning Sopranos actor James Gandolfini at the Cathedral of St. John The Divine in...

Former E.R. star Julianna Margulies has avoided a court showdown after settling a legal battle with her former managers.

The actress and executives at management firm D/F were scheduled to meet in front of a judge in January (14), but now it seems the trial won't be necessary.

He claimed that he and his associates were due post-termination commissions of more than $420,000 (£280,000) after helping the actress land her leading role in hit Tv drama The Good Wife and a spokesperson deal for L'Oreal.

Dontanville also suggested his suit could result in millions of dollars for him and his partners after The Good Wife was sold into syndication.

A judge allowed the manager to pursue claims against his former client and a trial was scheduled for January.

Margulies then countersued her former management company, claiming she fired Dontanville and his associates after becoming dissatisfied with them, claiming his behaviour had become a "source of embarrassment."

But now it appears the stand-off is over and the two sides have agreed to settle. Terms have not yet been disclosed.