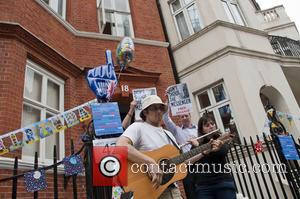 Politically-outspoken rapper M.I.A. had an unusual guest lined-up for her concert in New York on Friday (01Nov13) - she opened the show with a live video transmission from WikiLeaks founder Julian Assange.

The Paper Planes hitmaker decided to use her gig at Terminal 5 to give Assange a new platform to air his views on press freedom and online privacy, as he urged the sold-out crowd to fight the "military occupation of cyberspace".

Assange also praised the British star as "the most courageous woman working in Western music".

M.I.A.'s choice of guest should come as no surprise to her loyal fans - she teamed up with Assange to compose the soundtrack for his Tv show The World Tomorrow last year (12).

Assange was unable to appear in New York in person as he continues to hide out at the Ecuadorian embassy in London, where he has been given political asylum for over a year. He faces immediate arrest and extradition to Sweden to face accusations of rape and sexual assault if he leaves the building.