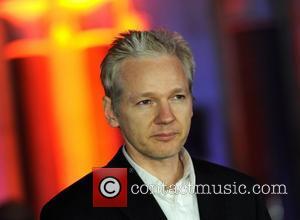 Picture: Julian Assange addresses members of the media at the Royal Courts of Justice. London, England - 16.12.10

Julian Assange, the founder of the 'WikiLeaks' whistleblowing website, has been granted bail by a high court in London today (16th December 2010) after a number of high-profile figures including the socialite Jemima Khan offered to pay the required 200,000 pound in surety money. Justice Duncan Ouseley declared that Assange will have to adhere to strict bail conditions including a nightly curfew and random check-ins with police.
It was reported earlier this week that Khan, as well as the film director Ken Loach and the documentary maker Michael Moore, had offered to donate a sum of money towards the 200,000 pound bail required. Speaking on her Twitter page this morning before the decision was announced, Khan said, "I'm abroad. Couldn't change dates to attend court today but pleased to have been able to put up bail money and hoping for Assange's release". According to the UK's Guardian newspaper, Assange has been held in solitary confinement for the past week, being released from his cell for only one hour a day.
The Australian, responsible for the single biggest leak in confidential military and foreign policy documents in history, was recently named 'Rockstar of the Year' by Italy's Rolling Stone Magazine.